The idea here is that when you provide a universally-desired paid service that "carries" something (such as a postmarked letter, electricity from a substation, or a message over a phone line) from point A to point B, you are obligated to provide consumers equal access to your carrying service. Providing equal access means, in practice, that you can't charge some person or entity more money for the same service of "communication" that you would charge another person or entity. As a common carrier, you must also follow the somewhat arbitrary standard of providing your service for a "just and reasonable" charge.

After many cycles of regulatory back and forth between 1980 and 2002(ish), the FCC decided that information service providers would not be classified as common carriers under Title II, and they were given Title I status under the Communications Act. Cable companies rejoiced.

From 2002 to 2014, cable companies and ISPs did exactly what you'd expect them to do as entities that were not bound to Title II classification: they started to throttle their services for certain (sometimes controversial) content providers. These practices led to a flurry of court challenges that eventually resulted in what we now call "net neutrality":

Clearly, internet service providers have some serious beef with Title II classification. Aside from supposed First and Fifth Amendment issues, telecom companies claim that common carriers are stifled by undue regulatory burdens that harm competition and innovation. To make information services work better for consumers, the ISPs claim that they need latitude that simply isn't available under Title II. Furthermore, ISPs are very uncomfortable with the fact that the FCC, wielding the sword of Title II, could dictate the rates that internet providers may charge for their services.

Fast forward to this past Thursday, when the FCC's Ajit Pai committed himself to reversing the FCC's 2015 decision to classify ISPs under Title II. "Nothing about the Internet was broken in 2015," said Pai. "No, it was all about politics."

It's difficult to deny that something about the internet was broken prior to the FCC's 2015 decision. Internet service providers were throttling services and arguably misleading consumers about data plans and caps. They were consolidating themselves into more and more powerful monopolies. They were well on their way to creating internet "fast lanes" for content providers who were willing to pay a premium for unthrottled services. Do these practices constitute "innovation"? Do they lead to more competition and better choices for consumers?

Following Pai's announcement, internet providers rushed to communicate to consumers that they're big fans of net neutrality. Here are three ISP representatives, each from a company that has sued the FCC over net neutrality, telling you that their companies are so cool with net neutrality, man:

Verizon supports net neutrality. We’ve long said that our customers should be able to access internet content and services of their choice. That’s been our belief for many years and nothing has changed. Most importantly, it is what our customers want, and it is vital to the success of our business.

Next, the statement from David Cohen, Senior Executive Vice President and Chief Diversity Officer of the Comcast Corporation:

And from Randall Stephenson, Chairman and CEO of AT&T:

AT&T continues to support the fundamental tenets of net neutrality. And we remain committed to open internet protections that are fair and equal for everyone. 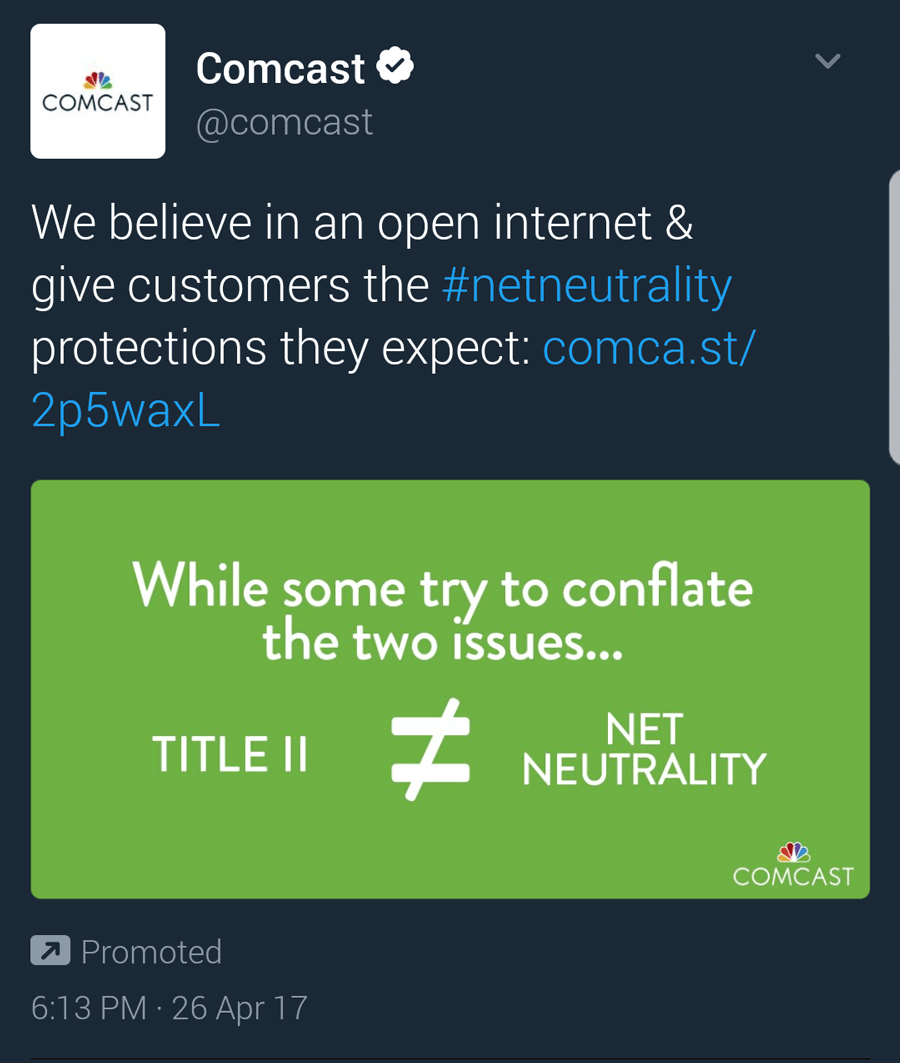 Thanks but no thanks.

Why are these telecom companies appearing to kneel at the altar of net neutrality?

"Net neutrality" is a term that polls well with consumers. And at the end of the day, it is an idea -- and companies can't be fined or sued over an idea, no matter how powerful that idea may be. The idea of a free and open internet is a good one, ISPs claim, but anything (especially Title II classification) that puts the force of law behind that idea is recast as a burdensome regulation that stifles innovation and infringes on a corporation's right to express its laissez faire Dasein.

Big ISPs have a history of abusing their powers under less stringent regulations. We would not find ourselves in the middle of a fight over net neutrality if consumers had not noticed that internet providers were not treating data from all content providers equally, byte for byte. Perhaps Title II is an outmoded regulation that stifles innovation for internet providers. As consumers, we should encourage ISPs to show us evidence of the innovation and competitive practices that were being rolled out before providers were reclassified under Title II. Perhaps ISPs do have a commitment to net neutrality. As consumers, we should ask internet service providers for evidence of this commitment.

Comcast claims that an "antiquated source of authority dating to the Roosevelt Administration" creates regulations for common carriers that "make no sense applied to the most dynamic and cutting edge technology of our generation." If Title II is "the wrong way to ensure net neutrality," one might wonder: what is the right way? Comcast claims that Congressional action and "bipartisan legislation" is the way to resolve the issue: 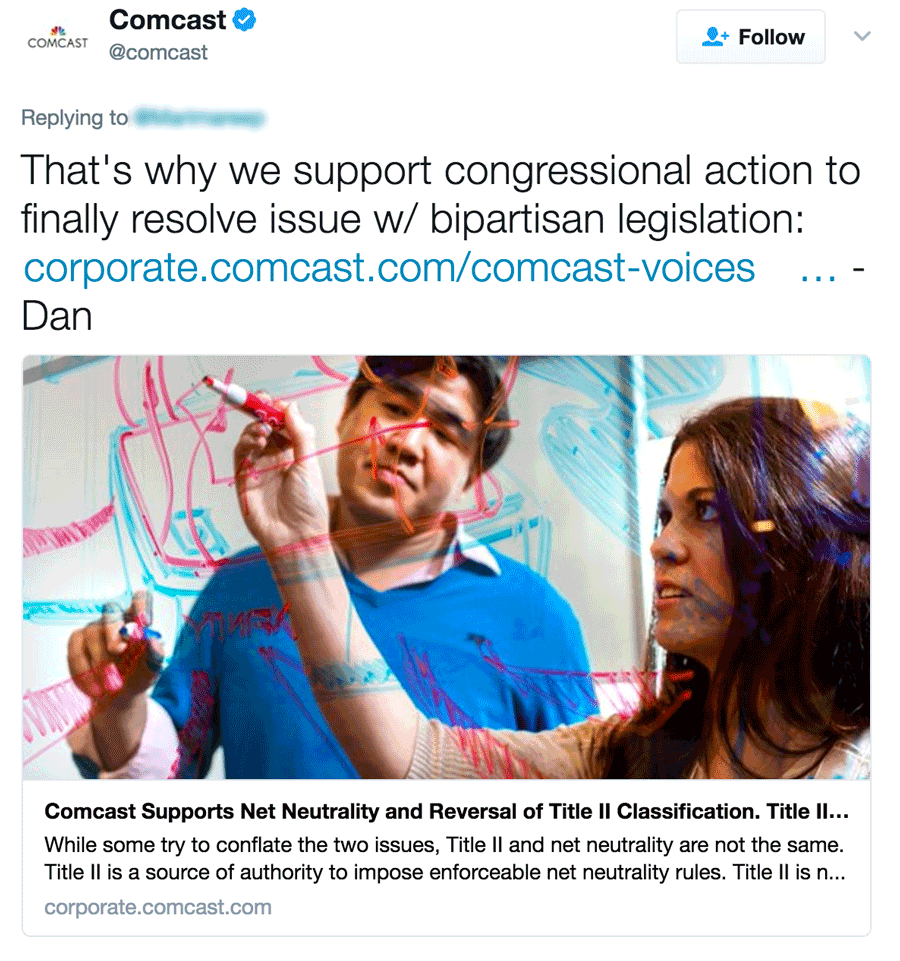 The "antiquated source of authority" that Comcast does not want to be bound to is in fact a federal law passed by both chambers of Congress and signed by President Franklin D. Roosevelt on June 19, 1934. Laws that are old do not by virtue of their age cease to have power over the conduct of citizens and corporations in this country. Lawyers for big ISPs are privy to this fact: that is why they have invoked the First and Fifth amendments to the Constitution (penned by James Madison and ratified by Congress on December 15, 1791) when they've sued the FCC over net neutrality. Casually referring to a federal law as an "antiquated source of authority" is an attack on the legislative powers invested in Congress by the Constitution of the United States.

The internet is indeed the most dynamic and cutting edge technology of our time. A free and open internet is the foundation of the most important educational, cultural, and scientific initiatives that we know. The United Nations has called internet access a fundamental human right. If the FCC reverses course on Title II classification for ISPs (or even if it doesn't), Congress must take action to prevent internet providers from placing limits on the free and open exchange of ideas on the internet. It's time to start calling your elected officials.

Questions or comments about this post? Get in touch with me.